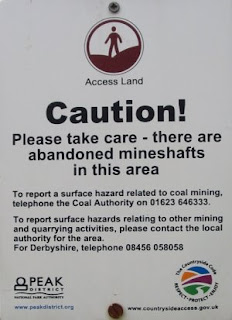 At first glance I thought this was a very sensible sign. It is posted near the entrance to an abandoned lead mine in the English Peak District.

I had just been down the mine. It is now a tourist attraction. For a few quid the operators will take you a couple of hundred feet below the ground and give you a long boat ride through a low, dark, dank and narrow passageway to a natural cave way below the surface of the beautiful English Peak District in Derbyshire's Pennines.

The area is popular with tourists and hikers. Of course it is only reasonable to warn the hikers that if they stray from the trail they may receive an unexpected opportunity to take a shortcut to the deepest reaches of the mine, bypassing the booth at which other tourists pay their admission fee.

If you will be visiting the Winnats Pass in Derbyshire and find yourself suddenly at the bottom of an abandoned mineshaft, please call 01623 646333. Oh, by the way, don't forget to take your mobile.
0 comments

It was a perfect summer's day in England. Perfect in the sense that it hadn't rained for almost an hour.

I stood on the shore of Lake Windermere in the English Lake District marvelling at the peace and serenity of this most beautiful corner of my birthland.

On the odd occasion when the Sun peered out from behind the angry dark clouds in the sky, yellow rays of sunlight glinted off the surface of the water as it rippled gently in the light summer breeze.

Suddenly out of nowhere, an RAF Eurofighter jet roared down the lake then lifted its nose, lit it's afterburners and in an attempt to drill a six inch hole through my skull, made the second loudest noise I have ever experienced (see footnote) then disappeared over the horizon as quickly as it had arrived.

Assuming that World War III had just been declared and that we would all be dead by teatime I decided to grab a spot of lunch.

As I left the hostelry in which I had enjoyed an excellent sampling of the local food and beer I saw this amusing sign. I wonder how they were able to determine whether dogs were entering the premises under false pretences?

Footnote: The number one loudest noise I have ever experienced was self-inflicted. I parked my car at the end of a runway at Toronto's Pearson airport and wound down the window while Concorde was taking off directly overhead. I regained my hearing three days later.
0 comments

In a surprise announcement this week, one of Canada's largest corporate supermarket chains has identified British food as "wickedly good". The chain has invested thousands of dollars promoting imported British food as part of its Christmas marketing campaign. However, the Blighty's Blog investigative team of reporters has uncovered unsettling facts surrounding the announcement.

The products are advertised as "Imported from Scotland" but, as Don River's investigations have revealed, the products in fact come from Scotland, Ontario - a small community in south-western Ontario's Brant County. "The first clue that lead to the discovery" writes Don "was the Canadian packaging". The original manufacturer in "Scotland" could not be identified from the package, but as exclusively revealed to Blighty's Blog, the products are in fact made by a Mrs Eilean Donan who was born in Toronto, but whose grandfather emigrated from Aberdeen in 1934.

Editorial note: Don River has updated his story. The products do , in fact, come from Scotland, UK. The error arose as a result of a lunchtime meeting with Don's informant - a Mr Johnny Walker. Blighty's Blog apologizes to the giant corporate supermarket for the misinformation. but upholds its story about the dubious origins of the product manufacturer and the anonymous single malt whisky distillery. Ed.

The investigation was spurred by another item on the product label: "made with single malt whisky". When questioned by a Blighty's Blog reporter, Mrs Donan was unable to identify which distillery the whisky came from. As our team later uncovered, there is not a single whisky distillery anywhere in Scotland, Ontario!

Blighty's Tuck Store president, John Corby, was reached and gave these comments:
"Well I certainly welcome this ringing endorsement of our products from such a powerful industry player" he said "and I strongly applaud Don River for uncovering the hidden big corporate agenda. I have faith in the Canadian public's ability to discern the advantages of supporting small, honest businesses like ourselves."

As Blighty's blog readers may already be aware, I collect silly signs. And the best silly signs are to be found in the home of the English language - Great Britain.

This sign is one of my absolute favourites. I found it outside a jewellery shop in Chesterfield, Derbyshire. It would seem to indicate that the shop's proprietor operates some kind of extortion racket.

If your future travels to England include a visit to Chesterfield, take great care - it's a very dangerous place. Even the parish church has a crooked spire - no kidding!
1 comments