Briton Andy Murray Qualifies for the Final at the Australian Open 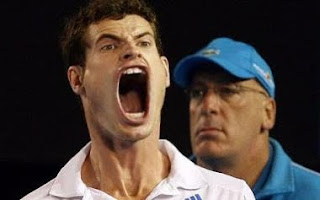 Immigration Problem Out of this World

British bookie Ladbrokes has dropped the odds on Britain receiving a wave of immigration from extra-terrestrial sources. When you walk into your neighborhood turf accountant's office and lay down a quid you can now expect to earn no more than a grand - down from a previous five grand.

The Science is Settled Say Top Boffins
Odds were shortened in the wake of a London conference this week attended by eminent scientists from around the planet. In a communique issued from the conference floor, scientists told the media that the "science is settled". "Our computer models" they say "predict that aliens will land in Britain within the next 50 years". 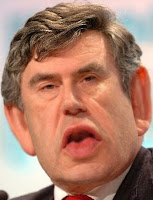 British Lord Affirms Aliens Expected
According to Britain's Daily Express newspaper, the bookie's move came after Lord Rees told the British people that alien immigration is now more likely than ever. His lordship's stern pronouncement was reluctantly endorsed by British prime minister Gordon Brown (pictured) after the PM denied tabloid stories that he is himself an alien.

Alien Minorities Set for Poverty
Immigration activist and conference speaker, Mr Lef Twinger released a study showing that when the aliens arrive they will already be economically disadvantaged. He demanded the government take immediate action to protect alien rights.

Unable to make decent chocolate of their own, Americans are to pay a record sum to snatch British chocolate giant Cadbury from the English. In the wake of the takeover of Cadbury by the US Kraft Corporate mega-colossus, thousands of jobs in England and Ireland are at risk and the Scots are to blame!

But wait; it gets worse. During the great global recession of 2009, descendants of "proud Edward's army" - based in London - loaded £20 billion of taxpayers' money in stagecoaches and hauled it up the Great North Road to Scotland to bail out their Royal Bank.

Now, Scottish bankers are sitting on top of Hadrian's Wall - their back pockets bulging with English cash, jeering and thumbing their noses at the English. Why? Because they just took £630 million of that English cash and loaned it to the American choco-pirates.

Americans are chocolate starved. No really, have you ever tasted American chocolate? That's right; nobody has. Just like American beer, it doesn't have any flavour at all. But the poor American people crave chocolate just like the rest of us and in desperation they have invaded England to get it.

Should we throw in the towel and close the doors of Blighty's Tuck Store now? Or should we wait until our beloved Cadbury chocolate bars have "Made in Pennsylvania" printed on the wrapper?
0 comments

Which nation ranks 171st in the world measured by gross national product? Here's a clue; it is located inside the City of London, England. Confused? Read on.

Dr Richard Dawood is a doctor living in London. He likes to get around the capital city on a scooter. Good idea really. Economical, environmentally friendly and easier to park than a car. His parking space is a 2 meter strip of land that he owns outside his home.

But, London's army of parking wardens has ticketed his scooter for being illegally parked more than 30 times during the last decade. Dr Dawood is, understandably, more than a little cross about this. He has fought the tickets and lost.

"Why?" he argued "should I be ticketed for parking on my property?". The angry doctor took his case to court. £10,000 in legal costs later and following a hearing in front of the learned Lord Justice Sedley of the Court of Appeal, he finally had a decision. He lost.

The learned Lord ruled that Dr Dawood owned the sub-soil of his property but the surface was fair game for the traffic wardens who fly lazy circles over Londoners' homes waiting to swoop down on their prey. Whatever happened to the idea of "an Englishman's home is his castle"?

The BBC calculated that if all London's parking meters and traffic wardens were a sovereign nation, the £456M they raise annually would rank 171st in the world. That would put them slightly behind the oil-rich nation of Liberia and ahead of 30 real nations according to World Bank statistics.

Perhaps it is time for London's parking racketeers to secede from the United Queendom. I am sure the learned Lord Sedley could be prevailed upon to assume the role of monarch of the new wealthy oligarchy. Then perhaps his head would be held high in the same manner as that of King Charles I.
0 comments

England to Win World Cup Before the End of the World

It's official. Britain's Sun newspaper has confirmed what fans of English football have known for the last 44 years. "England will win the World Cup before the end of the world".

In today's Sun there is a report that the Hubble Space Telescope has discovered an imminent supernova (exploding star) only 3000 light years from Earth. If the star explodes, as scientists predict, the blast will destroy life on Earth.

The announcement has stirred considerable controversy among doom-mongers. Proponents of global warming claim the supernova is irrelevant because their disaster was first in line. Meanwhile the H1N1 lobby maintains their pandemic will kill most of us before either global warming or the supernova can wipe us out.

A healthy looking economist stranded in snow from the worst winter in the northern hemisphere for 100 years told Blighty's Blog that the uncertainty surrounding the future of mankind has upset markets around the globe and has slowed recovery from the global recession. "We are all going to die from the aftermath of a collapse of the global economy" he stated chillingly.

Britain's Sun newspaper, renowned for its page 3 analysis of what matters most to Britain, commented on the destruction of life on Earth by the supernova saying: "Let's hope there's still time for England's very own stars to put in a stella (sic) performance at this summer's World Cup in South Africa."