Is Flying to the UK Dangerous?

The reason for this strange phenomenon is to be found in the science of astrophysics. I won't bore you with the science in this post; I'll just keep it simple. The galaxy in which our Sun and the Earth are located is a dangerous source of cosmic rays. These are the highly dangerous form of radiation that would quickly kill astronauts if they were not adequately protected. The Earth's magnetic field shields us from cosmic rays to some extent, but it doesn't do so evenly all over the planet.

Planes flying between Canada and the UK take a polar route flying very close to the region where cosmic rays are concentrated down towards the Earth's surface. Cosmic radiation is naturally higher at greater altitudes so flyers incur the double jeopardy of altitude and latitude leading to increased radiation exposure.

But don't worry; you will only spend a couple of hours in the high cosmic radiation zone - unless you are a member of a flight crew and work the transatlantic route regularly.

Footnote: Regular readers know that not everything they read on this blog is to be taken literally; I do like to have a little mischievous fun from time to time. However, today's science bulletin is not one of those occasions. It is taken from a very serious scientific book that I have read recently. Send me a comment (using the link at the bottom of the post) if you would like to be sent the reference details.
0 comments

Labels: Flying to the UK

Brits to drive on the right?

There is a significant update to this blog's previous story, Why do the British drive on the left? In a surprise announcement from Downing Street this afternoon a dramatic new proposal left the British people shaking their heads.

It rather seems as though British Prime Minister Gordon Brown is becoming increasingly desperate to hold onto the reins of power in the UK. Now he is trying to curry favour with French President Nicolas Sarkozy by putting forward proposals in a study paper that would create a harmonization of traffic flows between the UK mainland and the rest of Europe. Put simply it means that the PM intends to force British motorists to drive on the right hand side of the road like the rest of the EU.

The Downing Street proposal calls for a phased approach in which by 2012, the year of the London Olympics, Britain's 22 million cars will be driving on the right hand side of her roads instead of the left. The move is touted to be an appeasement to the millions of foreign visitors who will be in the nation's capital for the Olympic Games. If passed by parliament the plan is also expected to put European leaders' support behind Mr Brown in his bid for a successful re-election of his ruling Labour Party.

If the switchover is successful the government proposes to implement a second phase of the plan in which all trucks and buses will then join the cars on the right hand side of Britain's roads by the end of the following year.
1 comments

Labels: Why do the British drive on the left?

The Tarts of Bakewell 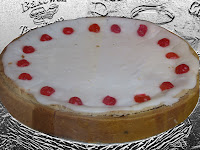 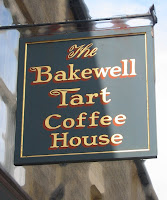 If a recent newspaper report is accurate we may soon witness an end to sales of the popular "Bakewell Tart" at Blighty's Tuck Store.

It seems that the bakers of Bakewell in Derbyshire are seeking a European injunction to protect their brand. If they are successful (as were the bakers of Melton Mowbray in Leicestershire recently) we may have to re-christen our tarts. Bakewell's bakers want the EU to regulate the use of the name "Bakewell" so that only Bakewell bakers can use it to describe their eponymous product.

I sampled the tarts of Bakewell in Bakewell, let me see - well it must have been in July on my way, well-dressed, to a well-dressing near Bakewell. They were certainly baked well but they cost an awful lot more than the fine, fresh little tarts to be had at Blighty's Tuck Store every thursday morning.
0 comments

Who Hung the Monkey?

One of the most bizarre British legends comes from the north east of England. It is a tale of fear, misunderstanding and, for the people of Hartlepool, perhaps their only claim to fame - or shame - depending on how you interpret the story.

During the Napoleonic wars a French ship foundered just off the coast of England near Hartlepool. The citizens of England were naturally very apprehensive about the possibility of a French invasion and watched the shipwreck very intently. A sole survivor was washed ashore; not a French sailor, but the ship's mascot - a monkey. The ship's crew had proudly dressed their mascot in a sailor's uniform.

The local townsfolk seized the monkey and taking it for a French spy, sentenced the unfortunate creature to summary execution by hanging. To this day, people from Hartlepool are often greeted with the derisory greeting: "who hung the monkey?".

Critics of the legend believe it to be untrue. Since Hartlepool is a seaport, they argue, the residents would have met many foreign sailors - including Frenchmen - and would know the difference between a Frenchman and a monkey.

I believe the story may be true but the explanation is less derogatory to the people of Hartlepool than the traditional interpretation. The Napoleonic wars had resulted in mass recruitment to the armies of Great Britain. Many thousands of British soldiers had fallen in European battles in the quest to curb Napoleon's ambition for conquest. Hatred for the French would have been at a level comparable to the hatred for Nazi Germany during the Second World War.

It is quite plausible that the people of Hartlepool knew exactly what they had found on the beach that fateful day and hanged the monkey as a symbol of all the resentment and hatred for the enemy.

So, if you are from Hartlepool, hold your head up high when somebody grins and asks you "who hung the monkey", then tell them why.
1 comments

Isn't the UK a wonderful country? You can be born a lowly serf without two brass farthings to rub together, learn to play a guitar, and by the time you are ready to retire you get an invitation to Buckingham Palace to receive a gong from the Queen. After that it's easy street for you; invitations to open village fetes, a seat on the board of major corporations; serfs bowing to you in the street. Blimey, the toffs have it good!

At the top is Her Majesty The Queen. She is the only person in the Commonwealth who can be addressed as "Her Majesty" and has sole authority to bestow titles and honours on her subjects (although governments often select the candidates or, in the case of Canada, forbid their citizens to hold foreign titles).

Next in the pecking order come members of the Royal Family who hold the title of "His/Her Royal Highness".

Next in line are the peers. There are five ranks of the peerage:
1. Dukes
2. Marquesses
3. Earls
4. Viscounts
5. Barons
All except Dukes can be referred to as "Lord". All are members of the British House of Lords and were hereditary until 1958 . Since 1958 there are also Life Peers with the rank of baron. Persons called "Lord" or "Lady"+first and last name have courtesy titles meaning they are sons or daughters of a peer.

Down among the weasels, stoats and ferrets comes "Lord Muck" - like owners of shops in the Commonwealth flogging British stuff. Is it too late for me to learn to play the guitar?
0 comments 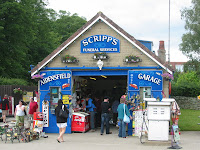 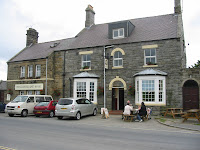 There was a break in the rain for part of my recent visit to the UK. I took advantage of it to drive over the North Yorkshire Moors and through the beautiful little moorland village of Goathland. This picturesque village sits on top of the moors a few miles from Whitby. It is a very small village but it attracts a huge number of visitors every year. Several busloads of tourists were strolling through the place while I was there. Of course, Goathland is the filming location for the enormously popular TV show "Heartbeat".

I enjoyed lunch in the Goathland Hotel (aka the "Aidensfield Arms") and spent a few pounds in the souvenir shop inside "Scripps Garage". The village and the buildings in which the TV show is filmed look just like you see them on TV. If you are travelling to the UK this summer and your travels take you to Yorkshire, then put "Aidensfield" on your itinerary. You can reach Goathland by road, or even better take a ride on a steam train with the North Yorkshire Moors railway. Trains out of Whitby station stop at Goathland.