A Pony Per Day - Now Cough Up!

I really trust the big banks. No really, I do. They make it perfectly clear they are going to hang me upside down and shake every loose cent out of my pockets. And they can be 100% trusted to do just that. Yes, "banking can be this comfortable". Especially if you work on the top floor of a 68-storey downtown tower and spend your days drooling over your multimillion dollar bonus.

But, hey, Canadian banks are benevolent sweethearts compared to the United Queendom's voracious banking system. One of the big Britbanks advertises "our managers are always here to help you". I experienced their brand of helpfulness during a recent trip to the Queendom.

I had taken the precaution of buying some British money before leaving Canada but most of it was in large bills. No problem, I thought. I strolled into a branch of the friendly Yorkshire Bank and asked them if they would be so kind as to exchange my £100 notes for something smaller.

The teller looked at me from behind the bulletproof glass screen with an air of deep suspicion. "Do you bank with us?" she inquired. "No" I replied. I could sense her hand moving towards the secret panic button that would silently summon a squad of anti-terror police armed to the teeth with automatic weapons.

"Why don't you go to your own bank? she asked. "It's in Toronto" I said; "I am visiting from Canada and I need some smaller bills that I can spend in the shops". A manager was summoned. "I am sorry" came the authoritative voice from the safety of her shelter behind the gunfire wall; "if you don't bank with us we can't help you." I imagined that she probably silently added something to the effect of "now bugger off back to Canada you dangerous and ugly little foreigner".

That same nasty little yorkshire bank, by the way, gouges its customers with huge fees in a reverse Robin Hood sort of way. They have a policy of setting an "agreed overdraft limit". If you fall on hard times and exceed your agreed limit they levy a fee of a pony (twenty five pounds) per day (yes... PER DAY!). Loan sharking in the United Queendom is perfectly legal it seems and Britain's chartered banks are the Great Whites of the high street

Shocking News from South Africa
In the run up to the start of this summer's World Cup soccer competition in South Africa, Blighty's Blog has uncovered a devilish plan to thwart trouble from English soccer hooligans.

British Fans to Get Special Treatment
The official press story that broke yesterday omitted key details that Blighty's Blog has been able to uncover. Our South Africa correspondent Pik Dawinna has dug up a sinister sub-plot to the main story. In this Blighty's Blog exclusive we reveal the rest of the story.

It is true, South Africa is indeed recruiting extra shark-spotters during this summer's competition. But their real job is to steer the Great Whites toward a special beach reserved for British soccer hooligans. Beach patrol officials will then place hundreds of crates of lager along the beach.

Funding for the covert operation has reportedly been received from several European soccer federations who have hosted British soccer hooligans during previous competitions.

What a Lovely Morning for a War

The British Isles were invaded and occupied several times throughout history. Now the British people can be extraordinarily patient, but the time comes when enough is enough.

English gentlemen of the Middle Ages took horse to save the Holy Land from the Saracens. Then during the Hundred Years War (which actually took 116 years to complete) it was found to be profitable to hop on the channel ferry, bully a few Gauls and bring some back to be held for ransom. 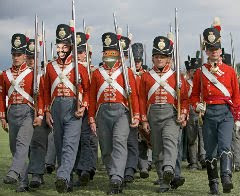 But it didn't always go swimmingly well for what the Brits - for some strange reason - refer to as their "Millet Tree". Mad King George and his redcoats were sent packing by the American colonists. Actually, if truth be told, the redcoats were a determined force and were on the point of overwhelming the Americans until the latter formed an alliance with the French. Payback time for the French came during the Napoleonic Wars when the Duke of Wellington trounced "Boney" and his perfumed warriors.

Queen Victoria is currently Britain's longest serving monarch. During her long reign she built a huge empire covering two thirds of the globe. Victoria waged war on many countries, including Zanzibar.

The war with Zanzibar commenced at two minutes past nine on the morning of 27th August 1896. Royal Navy gunboats fired on the town disabling the defending gun emplacements. A naval battle ensued resulting in the sinking of the defending nation's Royal Yacht.

The Zanzibar army sustained 500 casualties but only one British sailor was wounded.  The war raged on for a long, drawn out thirty eight minutes. The defenders fought back with artillery and machine guns but at 9:40 the same morning a victory for the Empire was assured and the British officers retired to their mess on board the Royal navy flagship for a nice cup of tea and a couple of biscuits.
0 comments

Image: "London Bridge" in Lake Havasu City, Arizona.
A brilliant TV series from the United Queendom was aired in Canada a few years ago. It was called "Auf Wiedersehen Pet". It told the story of a bunch of hapless entrepreneurs from the north-east of England who sold Middlesbrough's transporter bridge to a native American band in Arizona. 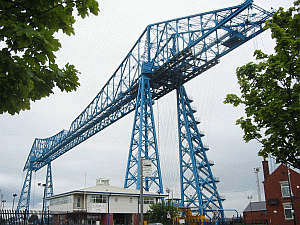 Dismantling of the bridge was shown on TV and the series culminated - following a hilarious story - in the reconstruction of the bridge in the Arizona desert. Filming of the show led viewers to believe that the bridge had really been moved - which was not the case. The Middlesbrough Transporter Bridge is an unusual yet magnificent structure that still operates carrying vehicles across the River Tees.

Of course, the idea was not entirely original. In fact the show may have been a poke in the ribs at an oil executive from the Excited States who, in 1971, paid more than two million dollars to buy London Bridge and ship it to the US of A.

Now American tourists can drive across the old London Bridge without ever leaving the land they love. Except it just isn't true!

You see, the man from Missouri who bought the bridge thought he was buying Tower Bridge. London Bridge (not even the original bridge, but one of a series of bridges that have spanned the Thames at that location) was a rather boring stone structure that was only 140 years old and needed to be replaced anyway. Tower Bridge - often mistaken for London Bridge - is a magnificent structure that is an iconic representation of London.

London City Council denied they sold the American oilman the wrong bridge. The oil baron from Missouri cheerfully shipped and rebuilt his bridge across a canal in Lake Havasu, Arizona where it is the central attraction of an ersatz English tourist centre. Except even that part of the story isn't completely true.

Off with his head!

The British do get so excited about their fox-hunting. Some like to dress up in jaunty little outfits called "hunting pink" (although they are actually scarlet-coloured) and charge around the countryside in an activity they describe as "riding to hounds". Their objective is to capture and violate - with extreme prejudice - the animal rights of the local fox population.

Other British people, on the other hand, choose to view fox hunting as a disgusting, inhumane and thoroughly despicable activity that should be - and has been - banned by the English and Scottish parliaments.

Fox hunting is primarily an activity led by the rich, landed gentry. Commoners are allowed to participate but when the law banning fox hunting was brought before the parliament in Westminster, the overwhelming vote in favour of the law in the House of Commons was overturned by the House of Lords. The house of seldom sober second thought obviously viewed the law as a violation of their animal rights.

Nonetheless, the Commons had its way and the law passed into statute in 2005. Since then the pro- and anti- hunting lobbies have been at loggerheads over alleged violations of the law by the jolly chaps in jaunty red coats.

Recently, an anti-fox hunting activist was following a hunt in an ultra-light gyrocopter. As he landed to refuel he was approached by a belligerent fox hunting supporter. In the ensuing fray the fox hunter's head was detached by the gyrocopter's rotors. What rotten bad luck.
1 comments