Hurrah, lots and lots of money!

Cor, struth! ... must be nice. Nice to work for the bloomin' British guvnorment I mean. It seems the fat cats who sit on the velvet benches in the Palace of Westminster have been feathering their own nests a little too finely. Her Majesty's civil servants have been equally unfettered with any reticence to insert their probosces into the public trough.

MPs and public servants have awarded themselves 24 carat pension plans that good old Britannia cannot afford to pay. Figures released by the new unholy alliance in power at 10 Downing Street show that every household in Britain is on the hook for ... wait for it ... TWENTY-NINE THOUSAND POUNDS to cover the over ONE TRILLION POUNDS funding shortfall for public pensions. Cor Blimey mate!

Well, now the bubble has burst. MPs pensions are being rolled back and the British government is facing pressure to act on inflated public sector pensions too.

One sign of the excesses hit the front pages of the British press today. A gypsy woman who was employed as an "inclusivity outreach worker" by two of London's borough councils has been apprehended by constables for excessive zeal in withdrawing funds from the public purse. She and an accomplice (who is already enjoying free board and lodging in one of Her Majesty's boarding houses for bandits) sought to fill their wagons with twelve million paper portraits of the Queen. 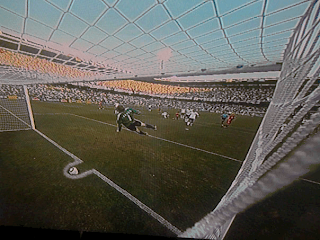 FIFA officials have been very bashful about a new goal-line technology they have been working on. It involves the use of cameras to determine whether a soccer ball has crossed the goal line. When the technology has been perfected it will allow referees to decide whether a disputed decision should be upheld or overturned.

Blighty's Blog's World Cup correspondent in South Africa - Mr Veva Zulu - has obtained an image taken by an experimental FIFA goal line camera clearly showing that England's disallowed goal in the game against Germany definitely did NOT cross the line.

FIFA did not allow this image to influence the referee's decision because the equipment still has some minor glitches that need to be ironed out.
0 comments

Michael "crazy man" O'Leary, the insane head of Ryanair has just given new meaning to the term "standby" when it comes to cut-throat priced air travel. Yes, you will be able to catch a Ryanair flight for as little as £5, but how many will actually want to? 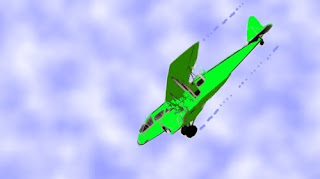 You see, Mr O'Leary plans to transform "standby" into "standfly". Okay, Blighty's Blog does have a reputation for satirical exaggeration, but this story actually appeared in Britain's Daily Telegraph newspaper this morning. Ryanair plans to remove ten rows of seats from the rear of its aircraft and replace them with "standing seats". And if these "standing seats" give passengers such a fright as to make them need to use the lavatories they will have to drop a coin in the slot to go in and relieve themselves.

When Blighty's Blog heard this story we sent an investigative hack to dig out more details. Our man in Dublin, Hava Guinness, met with a group of Ryanair employees at their local hostelry for a 10 course liquid dinner. As the evening wore on more and more details emerged of madman O'Leary's plans to fill the sky with his Eire planes.

New Fleet of Aircraft
Ryanair plans to sell off its fleet of modern jet aircraft and replace them with a fleet of biplanes that will cost next to nothing to acquire and operate. Although the new planes will have less seating capacity than the jets, Ryanair plans to go with an all standing floor plan that will cram as many gullible cheapskates as possible into its flying Irish sardine cans.

In order to maximize the capacity of each flight even the new "standing seats" will be replaced with leather grab straps hanging from aircraft ceilings.

Elimination of Lavatory Charges
The newly implemented lavatory charges will be eliminated. Asked why Ryanair would reverse this controversial and unpopular charge so quickly, a Ryanair employee explained that there won't actually be any onboard lavatories. "Lavatories use too much floor space" he explained, "we can squeeze another six punters into the space where the lavatories stood".

Elimination of Aircrew
In a further move designed to increase capacity on its routes Ryanair will re-examine the need for aircrew. Ryanair is looking into whether it actually needs pilots on board its aircraft. In future Ryanair flights may be operated by ground-based pilots operating the aircraft by radio control. It will then be possible to eliminate cockpits creating space for another twenty standing passengers.

Elimination of Stopovers
In examining its operating costs Ryanair has determined that airport landing charges are a significant burden on its bottom line. These charges can be reduced dramatically by eliminating stopovers on long haul flights. A solution has been found that eliminates stopovers while further increasing capacity on its routes.

In the future one or more passenger-carrying gliders will be towed behind each Ryanair plane. Each glider will have an all-standing capacity of thirty-six passengers. As the flight passes stopover destinations gliders will be uncoupled and allowed to land in a convenient field near the destination city.

Elimination of Landing Charges
In fact Ryanair has another plan to eliminate airport landing charges completely by passing them onto passengers. Passengers will be charged a "carriage fee" for taking them to their destination but will them be asked to pay a "landing charge". Passengers who decline to pay the landing charge will be offered the use of a parachute for a nominal fee.

Al Fresco Seating
Ryanair has determined that the wing surfaces of its new fleet of biplanes could become an underutilized resource and has drafted a plan to install more leather grabs straps along the wings. An employee, who wished to remain anonymous, opined that passengers might actually enjoy the great view and fresh air in these "Al Fresco Seats".

In the future, Ryanair's passengers will be able to book a flight then wait outside their own front door for pickup. As their flight passes overhead a rope will be lowered ...