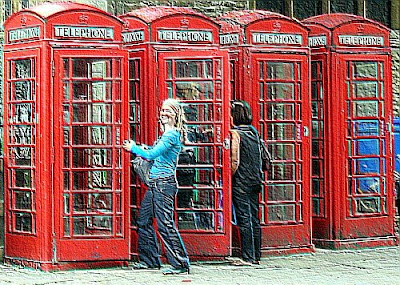 They are big, red and everywhere; at least in the UK anyway. The uniquely British telephone kiosk is one of the fondest reminders of everything British.

They were introduced in 1924 based on a design produced by an English architect, Sir Giles Gilbert Scott.

British phone kiosks were painted red to attract the attention of vandals who would routinely break the windows and render the telecommunications equipment inside totally inoperable.

The kiosks were constructed of cast iron so that even when the vandals had completed their handiwork the structure itself would remain intact for tourists to admire.

The doors are notoriously difficult to open. This feature ensures that fit young vandals are able to gain access, but after they have finished modifying the equipment inside, old ladies will be unable to enter. This seems to make sense because the elderly ladies would be unable to make a telephone call with the broken equipment anyway.

But why did Sir Giles design such a monstrous piece of street architecture in the first place? The commonly held belief is that the primary design imperative was for a structure that would shelter the British public from the incessant rain that falls on the United Queendom throughout the year.

Perhaps the popularity of mobile phones has reduced the need for many of Britain's telephone kiosks. Thousands have been refurbished and shipped to North America where they stand like a beacon outside restaurants to attract a whole new set of vandals. A refurbished British telephone kiosk can be purchased for around a couple of thousand bucks or you can buy a six inch high replica at Blighty's for significantly less.