Blighty's Blog spent a Fortnight in the United Queendom in August and came back with some ripping yarns to tell. Here is another "Tale From the Trip".

A big bit of Britain is missing. Maybe it was the Vikings (my ancestors), maybe it was the Romans or the Normans. Somebody, or something, sometime, took a giant bite out of England's east coast.

Danger! ... Danger!
The missing bit is a bay 20 miles long by 15 miles wide called "The Wash". The Wash is a dangerous place to be. Navigation through its shallow waters is fraught with hazards. The Royal Air Force uses the western shoreline as a training area and frequently drops bombs on it, but I didn't find that out until an RAF fighter jet whistled through my hair.

Diamonds Gone Forever
It was dangerous even before the RAF earned its wings. My namesake, King John of England, lost the Crown Jewels in the Wash. I have shared my first name with only one English monarch and his whole reign was something less than spectacular.

I decided to visit The Wash this past summer. I had never seen it before and decided that this was the year to put a check mark against it. My tour route took me past the western shore (the inland coast) of The Wash.

The Fool on the Hill
No problem methought, just make a slight diversion, find a place to park near the seashore and stroll along the beach. Fool.

There are no signs indicating "beach this way". There are no traffic jams of holidaymakers carrying mother, father, 2.5 kids and the family dog on a day out to the seaside.

Instead, after a lot of navigation guided by the Sun, we managed to find a "white road" (the lowest classification of roads on a British motoring map) that wound its way through the hedgerows ending up alongside a huge wall of grass covered earth.

We parked the car, walked along the edge of a field, climbed a steep flight of steps and found ourselves on top of a massive dyke overlooking The Wash.

The first attack by the RAF took us by surprise. One of their fighter jets screamed in very low from the south. I pointed my Canon at it and fired off a few shots but the jet managed to get away. 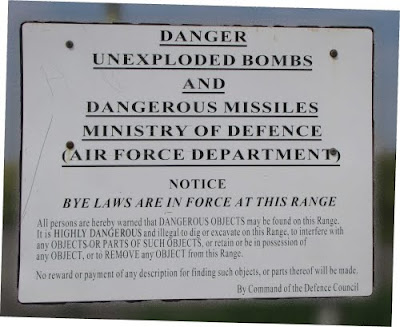 The Parting Shot
The same jet made several passes, its undercarriage skirting through the parting in my hair, its engine noise pounding my eardrums. Eventually the airstrike was over; the pilot pulled back on his stick and flew inland.

We retreated. "Blimey" I thought, as we drove back to the main road, "they don't like tourists here". I pulled out my itinerary and put a big black check mark against another item on the list. We had done The Wash.

Labels: Tales From the Trip, The Wash