As predicted in this blog a couple of weeks ago, the entire UK parliament has been hung following an indecisive general election.

Britain had been expecting a hung parliament after numerous polls revealed that the British people really can't make up their minds which party they want in power. Now the election is over and the men with bowler hats and umbrellas are squabbling over who should be the new tenant of #10 Downing Street.

But, Blighty's Blog has uncovered a sinister plot to throw them all out of office. It has been revealed exclusively to Blighty's Blog by our Buckingham Palace correspondent Elizabeth Scorgis that Her Majesty the Queen has sent for Monster Raving Loony Party leader Alan "Howling Laud" Hope. 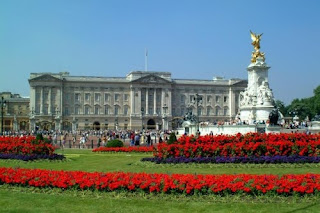 Our correspondent relayed news of  the unexpected move, to our UK office in Whopping Lye, England this week as soon as HM's summons had been sent out.

We were told by a lady-in-waiting that our source must be "barking mad". "The Palace is constantly dogged by this kind of nonsense" she complained.

But Elizabeth Scorgis is standing by the story. Blighty's Blog has a team of reporters camped out by the palace gates ready to bring more news of this bold and dramatic move by the sovereign to end Britain's post-election power vacuum.

Meanwhile, "Howling Laud" Hope (pictured, courtesy www.omrlp.com) gave the following comments to Blighty's Blog:
Many of our ideas and policies first ridiculed for being “Silly” “Loony” or just plain daft have now become the Law of the land.
It remains unclear whether the unelected Howlin Laud will make the trip up The Mall to see the Queen and, indeed, whether Her Majesty will invite him to form a government, but one thing is clear - there is Hope for British politics.