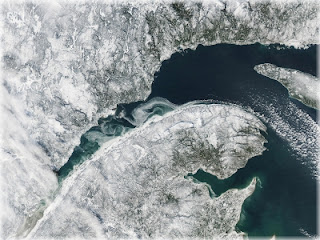 The Canadian government has kicked into high gear to deal with the problem. New Environment minister Peter Kent has ordered a public inquiry to begin as early as January 2012 with a mandate to explore all possible avenues of relief for the affected regions.

And, for once, the much heralded but as yet unseen global warming is not to blame. Instead, Britain's experts have predicted a reversal in the direction of flow of the mighty St Lawrence River. The entire Atlantic Ocean is expected to drain into the Great Lakes basin raising lake levels by as much as five hundred metres according to UN computer models.

The sinister scientific findings were passed to Canada hidden in a board game produced for United Queendom retail giant Marks & Spencer. A quiz card within the game box contained the question: "Which Canadian river flows past the cities of Quebec and Montreal before emptying into Lake Ontario?"

The science is settled - start building an ark!