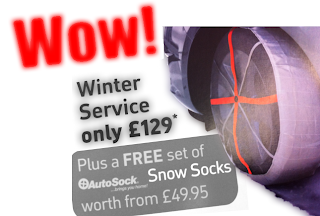 ** Weatherflash **
The Met Office has issued a warning to motorists throughout the British Isles. Temperatures are expected to drop to near freezing tonight as a cold front moves in from the Irish Sea. Motorists are advised to stay at home unless travel is essential. If you have to venture out onto the roads, police are advising motorists to wear a  double layer of socks ... on their tyres.