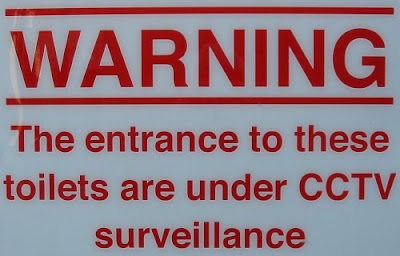 I wasn't impressed. I had been on TV before. Prior to being swept out of the corporate world by yet another downsizing I had received an invitation to be interviewed live on a Toronto TV station.

I was quite excited - and a little apprehensive. Then they asked me to perch my buttocks on the uncomfortable corner of a desk in front of a camera that also served as a monitor. I could see what was being broadcast in the monitor in front of me. I gritted my teeth, ignoring the pain in my rear end and focussed on the interviewer's questions. The real star of the show was the interviewer who was actually in another room. We never saw each other except on the screens in front of us.

Now, visiting my native Britain, and with the urge to answer the call of nature, I was faced with another opportunity to appear on TV. But why, I thought, would the British public be interested in my visit to the closet of convenience when Canadians had been regaled with tales of my achievements in the corporate business world?

I looked at the sign again. Where I had read "the entrants to these toilets are under CCTV surveillance" the sign actually said something quite different. It was actually the toilet entrance that the British public were interested in seeing. So I thought there must be a grammatical error in the sign.

Then I remembered the collective nouns which the British embrace so dearly. For example, when referring to the English national football team they say "England ARE doing well" (rarely actually) instead of "England IS doing well". So then "entrance" must be one of their collective nouns ...