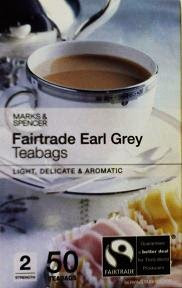 Star Trek fans will remember that starship Captain Jean-Luc Picard - the Frenchman with the strangely British accent - was a devotee of Earl Grey tea. But what is Earl Grey tea and who was Earl Grey?

Traditionally, Earl Grey tea is black tea flavoured with oil of Bergamot. If you read my post of a few days ago you will understand that the term "black tea" does not refer to tea made without milk. Black tea is a preparation of tea leaves made by oxidising the leaves (a process called "fermentation"). Black teas are the most common variety although green teas (made by drying tea leaves without fermentation) are gaining in relative popularity.

Oil of Bergamot is made by extracting the natural aromatic oils from the peel of Bergamot Oranges which originate from Italy. Incidentally, the same oils form the basis of Eau de Cologne.

The tea's name comes from its original patron, the 2nd Earl Grey, Prime Minister of Britain from 1830 until 1834. There are fanciful legends surrounding how the Earl was introduced to Bergamot Oil flavoured tea but the truth is lost in history. What is known is that the Earl held the tea in high regard and instructed his tea merchants - Twinings - to come up with a formulation of their own.

Earl Grey tea has been continuously popular from the 19th all the way through to the 23rd Century in tearooms from England to the furthest reaches of outer space.

Postscript: Blightys online tea shop at: www.blightys.com/TeaShop.html is now open. At Blighty's Tuck Store we have 20 feet of shelf space dedicated to imported British teas and every one of them is now available to online shoppers. Stop by today and grab a great cuppa.