What Not to Wear? Clothes Apparently! 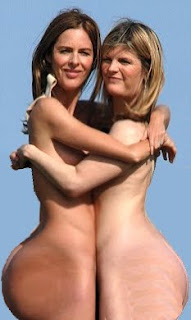 They are worth over £10 million. They are well known - and controversial - in both Britain and America. And nobody is really quite sure of their preferences when it comes to intimate relationships. They are Trinny Woodall and Susannah Constantine.

They didn't like each other when they first met. The English snob and the Eurotrash girl didn't hit it off. That all changed when, in 1994, Trinny and Susannah got together to write a fashion advice column for Britain's Daily Telegraph newspaper.

Their dot com business blew away £10M of investors money. Their first book bombed. But then they were given an opportunity to host a TV show on BBC2. From there their careers and fortunes blossomed and grew exponentially.

Trinny and Susannah left the BBC and their successful "What Not to Wear" show for competing broadcaster ITV for a contract worth well over a million pounds. At their new home they put out a new show called "Trinny and Susannah Undress ...". Yes, well ... um.

Meanwhile their renewed efforts at publishing books brought an entirely different result to their first failed effort and added huge amounts to their growing fortunes.

Despite making their fortunes helping people decide what clothes to wear, the pair seem quite comfortable doffing their own attire down to their birthday suits. They setup a publicity stunt, along with 300 others, in which they appeared stark naked on a hillside in southern England to create a living sculpture.

And then, to promote their new American show, they again parted company with all their attire to pose for the picture shown in this post (which may have become a little distorted as a result of climate change).

So, what's not to wear? Well, clothes apparently. Just follow the example set by the experts.

Labels: Trinny and Susannah, What Not to Wear