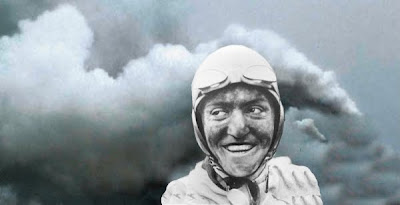 I was at Heathrow early this morning to gauge the reaction of the travelling public.

"I don't know what all the fuss was about" said one passenger arriving from Oslo, Norway. "The captain was able to restart the engines with no trouble at all once we dropped below ten thousand feet. My kids really enjoyed the steep descent when the engines cut out in the sky over the North Sea. They thought it was a more exciting ride than the roller coasters at Euro Disney."

"And what about the onboard service during the flight?" I asked. "Was it up to the usual standard?"

"Oh, much, much better than usual" the passenger replied. "The cabin crew were very quick to hand out hot towels so we could clean the ash off our faces before landing. And the meals were served in special containers with flip-up lids so we wouldn't get our food seasoned with it."

"What was on the in-flight menu?" I inquired.

"I was really pleased with the food" the passenger went on; "they served blackened Icelandic cod with black-eyed peas followed by a special dessert of an unusual spotted dick pudding; it was delicious."

So there you have it, things are back to normal for European air travellers. The British Airports Authority is working around the clock to clear the backlog of stranded passengers. A spokesman for BAA said "somebody had better move that damn clock out of the way, we are sick and tired of working around it. Some of us are going to have to stay at work past five o'clock this afternoon at this rate."