I Slept on the Street Admits British PM 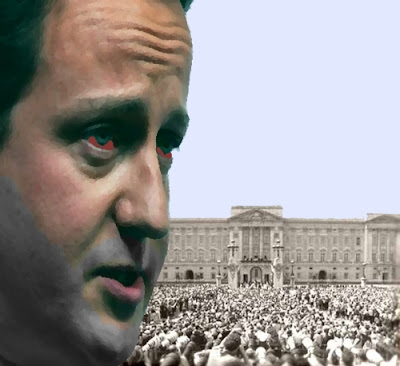 He may have posh digs now but life hasn't always been a bed of roses for British Prime Minister David Cameron. Blimey, it wasn't too long ago that the Conservative party leader was sleeping on the streets of London.

On hearing of the news of the betrothal of Prince William and Katherine (as she now likes to be called) Middleton, Cameron's eyes welled up with tears as he recounted one of those nights he spent sleeping on London's cold, damp streets.

The occasion was the night before the wedding of Prince William's parents Charles and Diana. Seeking to make the best of a bad situation, Cameron laid down his blanket on the cold, hard pavement outside Buckingham Palace so that he would get a good look at the royal couple as they swept by in their limousine after their wedding.

"God bless you sir, God bless you ma'am" he called out through the slit in the blanket he had tightly folded around himself to stay warm.

God's blessing may not have helped Charles and Diana but it rebounded in great measure on the poor wretch who went on to become the leader of sixty million people.

Prince William's engagement brought back strong feelings of nostalgia to Cameron as the news was broken to him in the cabinet room at Downing Street this week. Cameron enthusiastically led ministers in a boisterous round of excited table thumping amid cries of "I say, what a damned good show" and "jolly fine affair" and "that'll at least keep their bloody minds off their cancelled welfare payments".