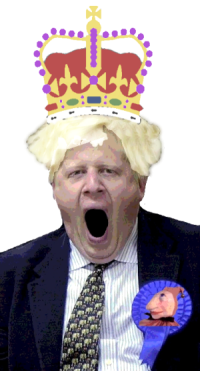 He has been called "the thinking man's idiot". Born in New York City (the one in America - not the one near Newcastle) he is a direct descendant of the last Grand Vizier of the Ottoman Empire, Prince Paul of Württemberg, King George II and King James I. He claims Muslim, Jewish and Christian heritage.

He could easily earn a good living as a stand-up comedian but he currently works in London - as Lord Mayor. Of all the incumbents of Mansion House (official residence of the Lord Mayor of London), Boris Johnson is ... definitely one of them.

Boris Johnson likes to clown around and is one of the most quoted politicians (albeit in the fumbling manner of America's Dan Quayle) on the 'net. One never knows whether some of his quotes were made tongue in cheek, but here is a sampling: