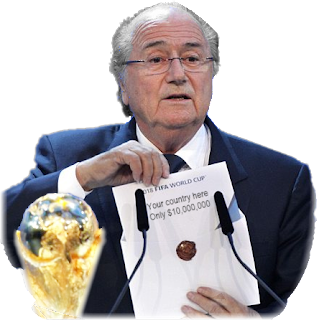 "There is no point in England bidding again until FIFA changes its voting system" he went on to say. Investigative reporters for Blighty's Blog revealed that FIFA's price is just too high.

"We don't mind stuffing a few fivers in somebody's back pocket" said a spokesman who wished to remain anonymous "but these guys in Zurich are just asking too much. Britain is still in a recession you know".

Blighty's Blog tried asking further questions but the door with the number "10" on it abruptly closed in our reporter's face. However, another unpublished Wikileaks report that fell into our hands this week reveals that FIFA votes will soon be trading on exchanges in London, New York and Tokyo.