The Best House in Britain 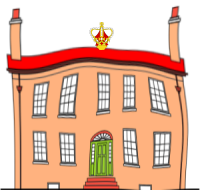 The United Queendom is home to over 61 million people living in no fewer than 13 million residences. The average Briton is said to live in a 3-bedroom semi-detached house on a modest suburban lot. But, in stark contrast to the lot of the common man, the Queendom is replete with stately homes and castles built over the centuries as the principal residences of the British aristocracy.

Noble gentlemen in the shires were expected to host visits by the sovereign and his or her entourage during their travels throughout their home and native lands. That required opulent accommodations and lavish entertainment in order to keep the sovereign's favour. In consequence there are many beautiful homes throughout the UK with magnificent rooms, expensive furnishings, and great works of art.

One of these stately homes stands out from the rest as possibly the best home in Britain. The home is now owned by the state and is the rent-free principal residence of a prominent British citizen. It features 830,000 square feet of space, 240 bedrooms, 78 bathrooms, a swimming pool and a large private garden with its own lake.

This fine home also features 92 offices in which a total of 450 people are employed. The principal resident operates an international real estate empire extending to the four corners of the world administered from this location.

Despite its opulence it is actually one of the smallest buildings in its class in the world. It costs £15m in annual maintenance but this cost is offset by the £4m in revenue earned from public tours of the property. The recession has slashed property prices in the United Queendom and this property has taken its share of the pain, falling in value by nearly 9% to a present market value of around a billion pounds sterling. It is not currently listed for sale.

If you are visiting the UK this year it is worth taking a look at this splendid stately home. In fact why not take advantage of one of the public tours. It is located to the east of the intersection of the A4 and the A302 in central London. Various properties have been built on this prestige lot over the centuries; the present property is called ... Buckingham Palace.