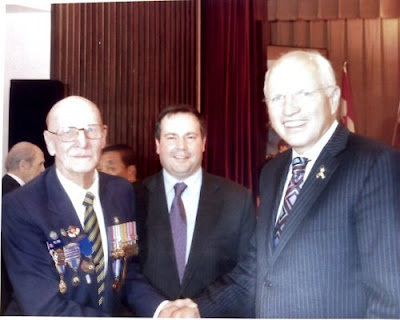 Overseas born vets living in Canada had their benefits taken away by a previous government in 1995 as part of a cost-cutting measure.

It is a credit to the current government in Ottawa that, even during a severe recession, they respect veterans enough to realize they deserve the support of the country they now call home.

The picture shows Mr Edge (left) thanking Minister of Veterans Affairs Greg Thompson on behalf of all British Allied Veterans. Jason Kenney, Minister of Citizenship is in the middle of the group.