10 Things I Miss Most About Britain: #4 Trains 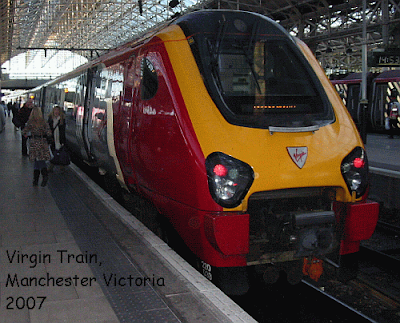 A 2000 Year Old Horse
The most fascinating piece of railway trivia is not actually about trains, but the track on which they run. Sixty percent of the world's railways use what is called "standard gauge" track. This means the distance between the rails is a standard four feet eight and a half inches. But why such an odd measurement? For the answer we have to measure the width of the rear end of a 2000 year old horse.

Early railways in Britain were built along routes established by the Romans. The Romans built their roads just wide enough for two horse drawn chariots to pass each other and that was ... four feet eight and a half inches. So, believe it or not, modern railways use a track gauge that was determined by the width of a horse's ass!

The First British Rocket
An Englishman called George Stephenson is often credited with building the first steam railway locomotive in Britain (and the world). Stephenson was an engineer and, although he was a prime contributor and figurehead of the team that built the "Rocket", he was neither the first man to build a steam locomotive, nor did he do it alone.

The Speedy Mallard
Steam locomotives became the principal means for hauling passenger and freight trains around the UK until they were finally phased out in the 1960s. Some of the steam engines racing along the British permanent way became legends. One of them, the Mallard, set a world speed record of 126 miles/hr in 1938 in Lincolnshire, England.

A Small Pony's Bottom
There is one line in the south of England that has kept its steam trains. Its track gauge was determined by the width of a very small pony's rear end. It is the narrow-gauge Romney, Hythe and Dymchurch Railway. If you ever find yourself on the Kent Coast, take a ride on the RHDR, it is a unique experience.

Dr Beeching's Axe
In the good old days there was British Railways. It was owned by the taxpayer after the major regional lines were nationalized in 1948. Branch lines ran everywhere until the Beeching Axe came along in the late 1960s and shut down over half of the network.

Clackety-Clack
I grew up in the south-east where Southern Region electric trains ran everywhere, every few minutes. These big, heavy green carriages wound their way through a maze of intertwined track in the suburbs of London. In the days before continuously welded track was invented, there was an expansion gap in the steel rails every few yards. As the heavy carriage wheels rolled over the gaps we would hear a characteristic "clackety-clack" noise that was music to my ears.

Arrested - for Train Spotting
As a boy I was a keen train spotter. Saturday afternoons would find me in the middle of a footbridge above the London to Brighton line, writing down train numbers, waiting for the elegant, luxurious Pullman to go by underneath. Today I would be spotted myself by CCTV security cameras and detained by the police under anti-terrorism laws for doing the very same thing.

Oh, The Good Times of Old England
In the 1990's the British rail network was privatized and things changed. I took a ride on the Trans-Pennine express from Huddersfield to Manchester a couple of years back. The carriages had been built in Europe and were lightweight with aircraft style seats. The train whispered its way across the Pennines. The experience was more like a short haul flight than a train ride.

The rail network in the UK has changed in so many ways since I left England at the beginning of the 1980s. The experience of riding a train will never be the same, but whenever I return, I try to take a train ride; it doesn't matter where, just a ride on a good old British train.