Well, it seems the British are all for a little fun and "how's-your-father" whenever they look out of the window and see clouds below them. Who can blame them really? It rains all the time on the ground, but hop on a jolly old aeroplane and the sun is shining all around you. 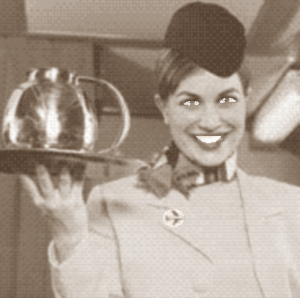 It's cheap too. For two ponies (that's fifty quid) you can escape the gloom, doom and Gordon Brown (but I repeat myself) and jet off to sunny Spain. Hasta la vista Gordo; hola Benidorm!

Benidorm. Ever been there? Me neither. They say it's like Blackpool with sunshine, but worse. Brits go there for cheapo boozo and hanky-panky.

I read an article in the esteemed Times of London today that suggests the hanky-panky begins long before the captain calls for chair tables to be stowed and seat belts fastened. Times readers wrote in to relate stories of their unusual flying experiences.

One told of a flight to Australia on New Year's Eve. As the plane crossed the International Date Line the captain turned on the cabin lights to wish the passengers a happy new year. As the lights came on, one surprised couple were, apparently, already having a very happy new year. If I can phrase this with appropriate delicacy, they were ... um ... worshiping Venus the goddess of love ... they were renewing their membership in the mile high club. The other passengers gave the couple a standing ovation.

Another Times reader reported a regular flight plying a triangular route between three European destinations. Often, one leg of the journey would be flown with only the flight crew on board. During take-off the flight attendants would sit on tea trays and slide down the aisles as the aircraft climbed.

Oh what fun it is to ride in a British Airways jet.