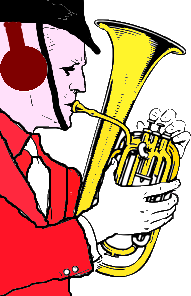 Her Britannic Majesty's government has determined that military brass band music is detrimental to health. An article published on the BBC website today reveals that military bandsmen have been ordered to wear earplugs because the volume of their instruments could lead to hearing impairment.

The military musicians tend to disagree arguing that if they can no longer clearly hear what they are playing the music be out of tune. But the RNID (Royal National Institute for the Deaf) has turned a deaf ear to their protests and fully supports the government.

Meanwhile the RNIB (Royal National Institute for the Blind) is keeping an eye on the situation and may soon be petitioning the government to make the bandsmen wear sunglasses to protect them from the intense glare of sunlight reflecting from the highly polished brass instruments.

Meanwhile, our Westminster correspondent T. Hames told Blighty's Blog that Conservative prime minister David Cameron has denied reports that the onerous new regulations were the result of a terrible bureaucratic misunderstanding. A rumour circulating in Whitehall suggests that a junior Tory staffer thought the surname of new Labour Party leader Ed Miliband was an abbreviation for "Military band".