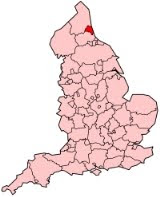 In a continuing effort to bring the latest news to readers, Blighty's Blog has opened satellite bureaus in New York, Washington and Philadelphia. The new bureaus will file stories through an operations hub in the basement of a building on Newbottle Street in Houghton-le-Spring in the northeast of England.

But Why New York, Philadelphia and Washington?
Blighty's Blog chose these locations due to their strategic importance. New York is just off the A19 with easy access to the Tyne Tunnel in Newcastle. Philadelphia is on the A182 just outside Sunderland and Washington is at the important junction between the A1231 and A1(M) with direct access to the Great North Road.


From their strategic location in the basement operations hub on Newbottle Street, our correspondents can be on-station in the three new bureaus within minutes.
Breaking News from Newbottle Street
Reports are already coming down the wire of a link between a secret building in the northeast of England and the Governor General of Canada. The mysterious structure sits atop a hill near Philadelphia. More details in a later bulletin.

STOP PRESS
The wire is now buzzing with news of a series of tragedies affecting a local family of aristocrats with links to Canada. Details are sketchy at this stage but early reports talk of missing cattle and small children ... and a large serpent ...