England Squad to be Lynched on Arrival in UK? 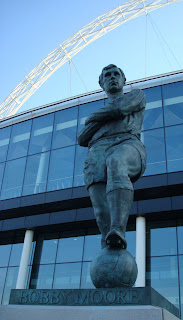 Following their crushing defeat by Germany in South Africa, England players are understandably reluctant to rush back home to the United Queendom where they fully expect to be lynched by angry mobs.

We understand their plane stopped at a secret location in Africa for a friendly match against a team called Theirown Shadows. Sadly England lost that match too. England striker Wayne Rooney who gave a Churchillian salute to photographers through the window of the team bus as the players left South Africa told reporters about the game.

"In the first half we had the Sun on our backs and the Shadows just seemed to stick to us like glue. In the second half the Shadows were behind us everywhere we ran. Our players just couldn't shake them."

Now Blighty's Blog has heard a rumour that Argentinian sports entrepreneur Anne Kidney has been in London talking to the FA about buying a stake in the team.

Blighty's Blog understands that the FA will release all the players from England's South African squad. The players will then be transferred to Argentinian side Fray Bentos. Ms Kidney's stake in the team was established last week following a secret meeting with FA officials in which a substantial sum of money changed hands.

Details are sketchy at this stage but a private memo, in Spanish, passed to Blighty's Blog by our correspondent in Buenos Aires, Mal Vinas, was hastily translated by our staff in Canada; it reads:
"England team now Fray Bentos Stake Anne Kidney prize."