How to Get Online While Visiting the UK 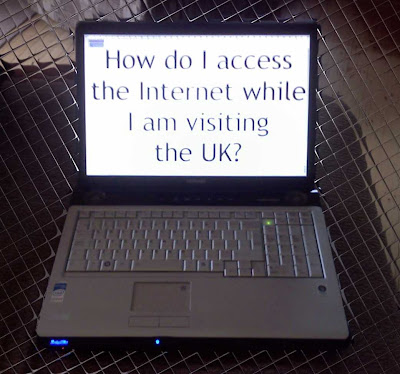 So you are planning a visit to the UK but you desperately need to stay in touch with your email while you are away. At home, checking on your latest messages is a trivial and routine matter, but once you are overseas things get a little more complicated.

This was the problem I had to deal with when I took a two week long personal break in my former home and native land earlier this year.

Leaving the Laptop Behind
Here in Canada I access my email on my laptop. But my laptop wasn't coming along for the trip. I like to be notified of incoming messages even when I am walking the dog (Trunkles - the dog with the blog) so I also have a smartphone on which I can read messages anywhere within range of a cell tower, 24 hours per day.

My cellphone provider's roaming charges make it prohibitively expensive to use my smartphone overseas, but there is a simple trick that I used to access my email through my smartphone for free. We'll get to that in a moment.

No Drive-by Logins
I found several pubs and restaurants offering "free WiFi". Simple, I thought. Just get within range of their signal and then world-wide-wam-bam-thank-you-man. But it was not so easy. I bought breakfast at one restaurant dangling the free WiFi carrot to boost trade. Sure, the WiFi was free but I had to ask my server for an access code before I could get online.

So Long Ted
So what was the simple trick that got me online for free using my Canadian smartphone? My phone has built-in WiFi and can connect to the Internet without using the cellphone network. I simply removed the SIM card from my phone to prevent it automatically roaming through a UK mobile phone network and thereby denied Rogers Wireless the ability to empty my bank account.

But what can you do if you don't own a smartphone? Most people use phones that can access the Internet but many phones do not have WiFi. There is still a way to put a dent in the cellphone billionnaires' pocket book.

Removing the Shackles
Cellphone network providers usually lock their phones to their own network. They tell us that this is because they subsidize the cost of the phones while tying you into a long term contract. However, you can unlock most phones for a small fee. Despite what your cellphone provider might tell you, this is not illegal. A simple Google search will reveal lots of companies who can do this for you.

A Quid a Day
Once in the UK you can simply go into a mobile phone store and buy a UK SIM card. UK mobile network Orange will sell you a whole day's unlimited Internet access for just £1.

Renting Time
Squinting at a tiny cellphone screen isn't good for the eyes. It also makes it difficult and/or expensive to view email attachments. So an alternative is to use a public Internet access computer, buy time online using a credit card and surf.