Tales From the Trip: #11 A Famous Pair of Wellies 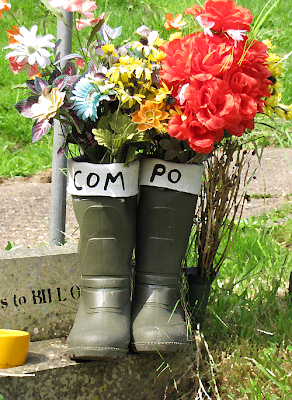 Last of the Summer Wine

Our travels in the United Queendom this year took us to the small Yorkshire town of Holmfirth to seek out the filming locations for the iconic British comedy TV show "Last of the Summer Wine".

The show is filmed in and around the town and the area is rich with scenes from the show. In later posts we will share information on how to make an overnight stay in Nora Batty's house and where to find Sid's Cafe.

But, in this post, we'll talk about British actor Bill Owen MBE. Bill played the role of "Compo" in the show. When he died in 1999, his real life son Tom Owen joined Summer Wine in his place.

We wanted to find where Bill was buried and pay our respects. With some determination, some white knuckle driving and some really splendid assistance from a local funeral director, we succeeded. 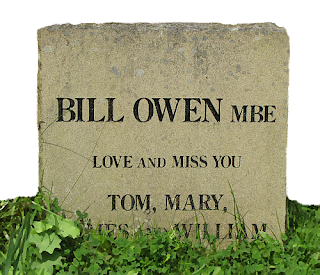 Park At Your Peril

Bill Owen is buried in St John's Church graveyard in the village of Upperthong just outside Holmfirth. The church is on a very narrow, steep hill. You can park a car at the side of the road outside only if you have a small vehicle, a very good parking brake and park with the passenger side of the vehicle right up against the stone wall.

Bill Owen's grave is on a steep slope behind the church. You can identify it immediately by the pair of Compo's wellies standing beside the grave.

And when you leave, you will have a hair-raising ride down one of England's steepest, narrowest hills, winding between parked cars on both sides of the road, meeting cars struggling to make it up the hill and passing you with a fraction of an inch to spare.

It was all worth it. Thanks for all those years of great entertainment Bill. Rest in peace.