Tales From the Trip: #1 The One Eyed Dutchman 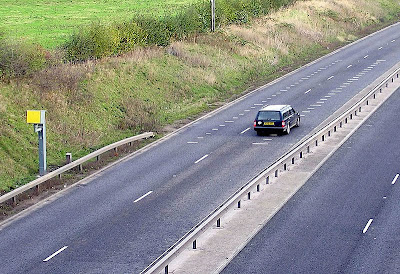 I wait with baited breath.The UK police have two weeks to issue a notice of intent to prosecute. Am I a wanted man? Did I get caught by any of their one-eyed Dutchmen while I toured around England?

They Shoot You in the Back
The "one-eyed Dutchmen" is the ubiquitous speed camera in use throughout the UK. I drove past hundreds of them during a two-week journey that took me from London's Gatwick airport to the Scottish border and back again. These Dutchmen shoot you in the back as you pass by. Cowards. Dumb, ignorant unthinking cowards. The most visible of them all is the Gatsometer invented in Holland. Hated on both sides of the English Channel many are condemned to death by fires set by angry protestors.

Evil Eye
The Gatsometer is a yellow box atop a post at the side of the road. It points its evil eye at a set of white lines on the carriageway. The one-eyed Dutchman fires a radar signal at the back of each passing car. If the vehicle is travelling too fast the Dutchman takes a picture of the license plate. A second picture is taken moments later to enable the dreaded box to compute the vehicle's speed.

What Size Shoes Do Policemen Wear?
The police then have two weeks to issue a notice of intent to prosecute - longer if the vehicle is a "hire car". The police, whose business revenue depends upon erring motorists paying fines, vehemently defend the notion that speeding causes accidents. But anybody with an IQ higher than his shoe size can see the shallow value of that argument.

A Double-Double and a Dutchie
What really happens on Britain's roads is that motorists drive hell-for-leather and slow down only when they pass by a speed camera. With many thousands of these devices throughout Britain to babysit road discipline the police are freed for other duties. Tim Horton's would do well there.

Go Like Hell
Britain's motorways are peppered with roadworks where the speed limit is lowered from 70mph to 50mph. Compliance with the 50mph limit is enforced by using cameras to measure average speed within a controlled zone. But roadworks cause traffic to become congested, frequently slowing to a crawl. When the congestion clears Britain's motorists can go like hell to compensate for the delay without exceeding the "average" speed limit.

Too Many Pedals
It took me a few days to re-acclimatize to driving on Britain's narrow, winding roads in a car with too many pedals on the floor and a strange stick beside the driver's seat. I drove very cautiously at first. British drivers were unforgiving. They drove so close behind me I could see the colour of their eyes. I upset a few of them by finding myself in the wrong lane approaching a roundabout.

Driven to Drink
One British driver has probably taken to drink to calm himself after encountering me on a bend in the road in Lincolnshire. My keener observance of the English Highway Code incited him to overtake me dangerously. He drew alongside me a little further down the road, wound down his window and said: "I am jolly cross with you old chap" - at least that was the gist of his blessing to me.

Seeing Red
And, just like here in Canada, red lights in Britain now seem to mean "floor the gas and go for it" to many British drivers. They have a camera for that too.