Tales From the Trip: #2 FlyGlobespan 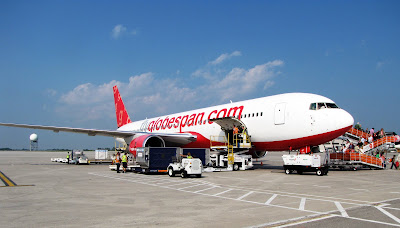 The Curse of Blighty's Blog
Blighty's Blog travelled to the Land of Hope and Glory last year on Zoom Airlines. They let us down so we put a blog curse on them. Weeks later they went bust. This year we ventured across the sea to England once more; this time with FlyGlobespan. We loaded up for bear, put on our woad, gritted our teeth and prepared for battle with another airline.

A Hex on Zoom
A year ago we shelled out a few extra dollars for "Premium Economy" seats on Zoom. We got priority check-in and boarding but we were shell-shocked to discover Zoom's "premium" seats were identical to their regular seats except for being four inches further apart.

So Much Better
So, this year, when we arrived at the airport with our "business class" tickets (for which we paid about a $150 premium each way) we were primed for another disappointment. We didn't receive any priority check-in or boarding at the airport which was a surprise and a warning. But when we entered the aircraft - a nice wide-body Boeing 767 - we were pleased and relieved to see that our $150 was well spent.

Leather Luxury
FlyGlobespan's business class seating was very comfortable. The rows were sufficiently well-spaced to allow the deeply reclining leather seats to be fully deployed without annoying passengers in the row behind. Each seat also had an adjustable leg and footrest. Economy class seats are also leather-covered but are narrower and do not have the wide row spacing found in business class.

A Better Airport
FlyGlobespan flies in and out of Hamilton Airport which is a pleasant change from Toronto's Pearson Airport. Hamilton Airport is an efficient, well-equipped regional facility and far less crowded than Pearson. There are no jet bridges so passengers have to walk across the apron and climb stairs to board the aircraft. That could be a problem in wet weather.

Our flight departed on time and arrived early. We travelled to London Gatwick via Belfast where we had a forty-five minute stopover. The journey was comfortable and the flight crew were polite and efficient.

Don't Board Hungry
Our flight departure time was around 8pm and we weren't served dinner until a couple of hours into the flight. My suspicious mind decided that this is a cost-cutting measure. Airlines probably have to feed passengers at particular intervals during a flight. By delaying dinner service as long as possible they escaped the obligation to serve a breakfast before landing. Sure enough, "breakfast" was a small cup of water.

£2 for a Cuppa
Flyglobespan charges even for tea and coffee in flight (even in business class) but meals are included in the ticket price. Headsets and blankets are offered for sale. The seat headset jacks are the common 3.5mm stereo type found on almost all audio equipment, so if you have your own headset, take it with you.

Car? What Car?
Flyglobespan operates a ticketless service. Book online and check-in with just your reservation number and photo id. We had rented a car at Gatwick through the airline and that created a problem when we arrived. After making our way to the car rental hall at Gatwick we realized that the airline had not advised us which car rental company they do business with.

Fortunately, the very helpful staff at Avis and Thrifty finally found our reservation (with Thrifty). It wasn't easy though. FlyGlobespan had not forwarded our booking to Thrifty who had no record of our car reservation. It was only when their helpful desk attendant made a few phone calls that we got our car.

Despite our apprehension about travelling with another budget airline we completed our round trip with a generally positive feeling about FlyGlobespan and would recommend that you give them a try.

Brits Pay More
One further note about FlyGlobespan. They have a Canadian website (flyglobespan.ca) and a UK website (flyglobespan.com). When we booked our flights in May we found that the same seats, on the same flights, cost a lot more if booked through their UK website (read about it here). When I went online - in the UK - to reconfirm our return flights I was blocked from visiting the airline's Canadian website. Perhaps the folks up in Scotland, where FlyGlobespan is based, read Blighty's Blog; lots of people do you know.

Labels: FlyGlobespan, Tales From the Trip